The pastor of 15th Street Presbyterian Church was the first African-American to speak before Congress on Feb. 12, 1865 in a memorial service to mark the passage of the 13th Amendment, the most important event in African-American history.  His church had earlier conducted the Watchnight service on New Years Eve, 1862, in prayer to insure the implementation of the Emancipation Proclamation.   On Aug. 2, 31Ways31Days encourages the support of the American black church, as the largest and most enduring African-American business enterprise and the cornerstone of our freedom struggle.  Each page features historic churches in communities around the country.  15th Street began a school for colored youth in the 1830s. Today's church is located at 15th and R Streets.  Nearby, Metropolitan A.M.E. is the National Cathedral of the African Methodist Episcopal Church. 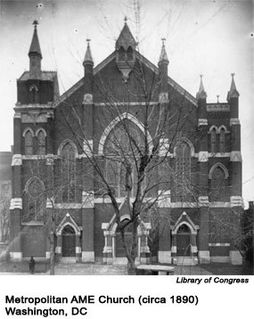 Begin 31 Ways 31 Days with a trip to Washington, D.C. to see the progress on the National Museum of African-American History and Culture, the second landmark on the National Mall to open in recent years following the Dr. Martin Luther King Jr. National Monument.  This construction camera shot from Earthcam shows the exterior is completed and its proximity to the Washington Monument.

Hawkins, one of the 50 Most Important African-Americans in Technology, said, " DISA, as the provider of choice for defensive cyberspace and IT combat support for the DOD, will focus on the global infrastructure of telecommunications and services delivery — comprised of a hybrid cyberspace ecosystem of mobile, collaboration, internal clouds, and commercial clouds."

He leads a global organization of military and civilian personnel who plan, develop, deliver, and operate joint, interoperable, command and control capabilities and a global enterprise infrastructure in direct support of the President, Secretary of Defense, Joint Chiefs of Staff, Combatant Commanders, Department of Defense components, and other mission partners across the full spectrum of operations.

As the Commander, Joint Force Headquarters – DODIN, he is in charge of the command and control of defensive cyberspace activities focusing on unity of command and unity of effort within the Department of Defense. He is responsible for organizing, training, and equipping the JFHQ-DODIN military and civilian force, which in turn is responsible for securing, operating, and defending the Department of Defense Information Networks.

Sharon Jones, small business advocate, said a draft RFP will be announced for Encore, DISA's contracting vehicle for small businesses in July 2015, with implementation in November under NAICS 541519, other computer services.

U.S. Transportation Secretary Anthony Foxx meets with counterparts in Ghana to discuss the West African nation's progress in civil aviation."Ghana is doing big things. Their economy is growing fast. Their capital is populated by young, educated leaders. They’re even spending a higher percentage of their GDP on infrastructure than we do in the U.S.," said Foxx. "In many ways, Accra is not just leading the way in Ghana; it’s leading the way in the entire continent. And, in particular, Ghana is leading the way in aviation."

WASHINGTON -- When Maj. Gen. (Ret.) Charles Bolden was pilot of the mission to deploy the Hubble Space Telescope, he and his mates only thought the telescope would last for 15 years.   Twenty-five years later, Bolden is the administrator of NASA for the seventh year, and he is amazed at what the telescope has revealed.

"Hubble is mapping out “dark matter” –that invisible matter that makesup mostof the mass of the universe; It first confirmed the presence ofblack holes in the centers ofgalaxies;It made the first observations of the chemical makeup of the atmosphere of a planet orbiting another star;It’s helped scientists determine that the cosmos is13.8billion years old; It’s provided the first high-resolution maps of the structures of planet-forming disksof dust and debris around stars like the sun;Its data has empowered astronomers and other scientists to publish more than 12,800scientific papers.Most recently,it taught humanity that the expansion of the universe is speeding up!"