Amarantus BioScience Holdings, Inc. (http://www.amarantus.com/) (OTCQX:AMBS), a biotechnology company focused on developing therapeutic and diagnostic products for diseases in the areas of neurology, psychiatry, ophthalmology and regenerative medicine, announced that it has received approval to commence trading on the OTCQX® Best Marketplace (http://www.otcmarkets.com/marketplaces/otcqx) (OTCQX) at market open today, July 13, 2015, under its existing ticker symbol, "AMBS."

"We are very pleased to have achieved OTC Markets Group's requirements for its premier securities marketplace," said Gerald E. Commissiong, President and Chief Executive Officer of Amarantus, featured on the cover of #BLACKDOLLARSMATTER: State of Black Business, 12th edition.

Stewart received a degree in history from Western Illinois University and holds two masters degree in national security from the Naval War College and national resource strategy from the Industrial College of the Armed Forces.

The founders of National Black Business Month announced the 12th annual 31 Ways 31 Days for August 2015.  The month encourages visiting at least one black business per day during the month with a suggested industry each day.  The August 1 and 2 suggestions are African-American museums and the Black Church. 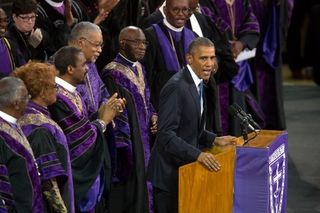 Denmark Vesey's church has prevailed over the Confederate flag after 200 years, a sign of the resilience of the black church nationally.

She was the protagonist for the Palace Hotel sit-ins in March 1964 with 2,000 demonstrators that resulted in desegregation of all 35 San Francisco hotels.

Moncur was accompanied by more than a dozen of her children and grandchildren from Newark, NJ, where she has lived since 1965.   She retired after 25 years teaching fifth grade in Newark Public Schools but recently gained a masters in restorative justice, which she favors as an intervention strategy.

She is also the author of Diary of an Inner City Teacher.  The program  was held at the African-American Art & Culture Complex to highlight ReUNION: Education-Arts-Heritage's documentary Who Was Tracy Sims? 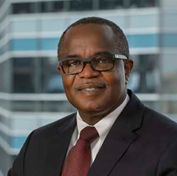 Erin Energy (NYSE MKT:ERN) starts shipping oil from its Oyo deepsea wells off the coast of Nigeria. The newly named exploration company based in Houston, was just added to the Russell index as well.   It wsa founded by CEO Dr. Kase Lawal, left,  as CAMAC.

Segun Omidele, Senior Vice President of Exploration and Production, center, commented: “Since becoming operator in , we are please with the increase in current production from an average of 1,300 boe per day in 2014 to more than 14,000 boe per day today. Drilling these two deepwater wells as 100% owner and operator is a testament of our operational abilities and we are very proud of our team. The cash flow generated by these two wells will contribute to our ongoing exploration and development efforts offshore .”  Femi Oyoade, left,  is Nigeria country manager for Erin Energy.

Erin Energy is an independent oil and gas exploration and production company focused on energy resources in sub-Saharan . Its asset portfolio consists of 9 licenses across 4 countries covering an area of 43,000 square kilometres (10 million acres), including current production and other exploration projects offshore, as well as exploration licenses offshore , and The , and onshore . is headquartered in , and is listed on the New York and Johannesburg Stock Exchanges under the ticker symbol ERN. More information about can be
found at www.erinenergy.com.

In a flurry of activity on African Development Bank President Donald Kaberuka's   last day, the board of directors approved a $45 million investment in a $300 million Atlantic Coast Regional Fund LLC II, private equity focused on West, Central and East Africa for the next 10 years.

The fund is managed by Advanced Finance and Investment Group, based in Dakar, Senegal, which previously managed AFIG-1 with a $25 million investment from ADB. Papa Madiaw Ndiaye, CEO of AFIG Funds, called the investment a "strong signal of the Bank's commitment to supporting indigenous African fund managers to catalyze growth and sustainable development across the African continent."

The $9 billion agency is responsible for every bit and byte in the U.S. defense establishment.  Part of the presentation revealed that DISA set a record for utilization of disadvantaged small businesses.

The Bar Association of San Francisco brought together African-American Partners ans Summer Associates to give the associates a leg up in the legal arena and to salute 23 of the partners for personally underwriting the summer experiences.

Rozenia Cummings, vice president of the National Bar Association, reminded the attendees of the association's 90th convention in Los Angeles, with a focus on the battle against police brutality, made visible throughout the past year, and a speech by California Attorney General Kamala Harris, also a candidate for U.S. Senate.

Surprisingly, the first black bank in America was founded in 1857 at the intersection of California and Montgomery, still the heart of San Francisco's Financial District at the site of the Merchants Exchange building by Henry M. Collins, a sailor and businessman.   The wealth of African-American entrepreneurs during the Gold Rush was aggregated through their churches and lodges to support the abolition movement nationally, including funding for John Brown's raid on Harper's Ferry.

Most recently, Alden McDonald's Liberty Bank and Trust was the essential differencemaker for the black citizens of New Orleans during the Hurricane Katrina tragedy.   #BLACKDOLLARSMATTER: State of Black Business, 12th edition calls on monetary policy decisionmakers to use NBA institutions as the essential mechanism to provide needed capital into depressed neighborhoods.

The courageous action of Bree Newsome  to take down the Confederate flag from the grounds of the South Carolina state Capitol has been a global rallying cry.

50 years ago, an 18-year-old graduate of Berkeley High School made a similar stand for justice.   The premiere of the ReUNION: Education-Arts-Heritage documentary "Who Was Tracy Sims?" on July 10 is the first full-length interview by the leader of the United San Francisco Freedom Movement and a rare return to San Francisco.

Tamam Tracy Moncur, now a grandmother and retired Newark, N.J. school teacher, is also a new holder of a master's degree in restorative justice and author of a book Diary of an Inner City Teacher.  She and her family will attend the screening at 7 p.m. in San Francisco.

Fourth of July wishes to NASA Administrator Charles Bolden, a retired Marine Corps major general, who recently received the National Space Trophy.  Bolden was the pilot of the shuttle mission which delivered the Hubble Space Telescope into space 25 years ago and now is in his seventh year leading the space agency.

The holiday is known for food and Say Grace and Wipe Yo' Hands:  BlackRestaurant.NET's Guide to America's Black Restaurants is your one stop source for the best in black food retailers and manufacturers around the nation.

The king and queen of black food are Lowell Hawthorne, CEO of Golden Krust Caribbean Bakery, with more than 100 locations in nine states, and Kristen Pierce, CEO of Harold's Chicken Shack, a Presidential favorite in Barack Obama's early days in Chicago.  it has 50 far-flung locations in the Midwest.

One penny on the dollar of the credit demand for black businesses was supplied through Small Business Administration loans in the past year, according to the agency's weekly lending report, cited in #BlackDollarsMatter: State of Black Business, 12th edition.

In a filing with federal financial regulators with scholar Timothy Bates and advocate Anthony Robinson, Esq., National Black Business Month used rules of thumb from the Federal Reserve's Survey of Small Business Finance.   The expected demand would be $30 billion.  However, SBA guaranteed loans worth $300 million in the past year.

One of the themes of 31Way31Days during the 12th annual National Black Business Month is providing that monetary policy target in order to reduce the 9.5 percent unemployment rate among African-Americans, compared to a 5.3 percent overall ratio.

#BlackDollarsMatter: State of Black Business, 12th edition reports that the U.S. government spent just over $7.2 billion with African-American federal contractors in the just completed fiscal year out of the half-trillion in procurement.  The Small Business Administration reported that a record $91 billion went to small businesses, 24 percent of the total.  The figures are tentative based on an analysis of the available data in the Federal Procurement Data System.  Some Dept. of Defense contracts are delayed for 90 days.   The annual report calls for an increase in purchasing from African-American businesses to at least $30 billion to help address unemployment and other economic impacts of the recession.   The Aug. 1 kickoff for the 12th National Black Business Month addresses the 30-30-30 plan for economic renewal.   The 12th edition includes as state by state breakdown of federal procurement also with state supplier diversity totals and an exclusive analysis of gender trends in black entrepreneurship over the past 20 years.  Order at the buybooks tab.

We declare a four way tie for the best week of the week.

Misty Copeland -- won a prize at the Black Caucus of the American Library Assocation Book Awards Sunday night for her Life In Motion and Tuesday was announced as the first black principal dancer for the American Ballet Theater. She also stars in a new Under Armour set of commercials.

Courtney Young -- presided over the American Library Association conference as president.  She is  Penn State head librarian and associate professor of women's studies.

"We are very pleased with the  issuance by the USPTO of the patent covering the use of eltoprazine in  treating patients with Parkinson's disease receiving L-DOPA and who  suffer from L-DOPA induced dyskinesia. This new issuance helps the Company continue to build our intellectual property estate for eltoprazine," said Gerald Commissiong, Amarantus President and CEO , one of the 50 Most Important African-Americans in Technology who previewed the news at Innovation&Equity 2015 in January.

Another 50 Most selectee: Dr. Trevor Castor, CEO , Aphios Corporation states that, "It is therefore highly desirable to have simple therapies which can be administered (e.g. oral formulations) without the need for specially trained healthcare providers."Dr. Castor continues, "Our recent in vitrostudies have shown that our lead Alzheimer's disease drug candidate, APH-1104, a potent analog of Bryostatin-1, is neuroprotective by α-secretase activation via novel PKC isoforms, down-regulation of pro-inflammatory and angiogenic processes and the substitution of β-amyloid for its soluble and harmless relative, sAPP-α at concentrations which are orders of magnitude lower than conventional APPmodulators. Ourin vivo studies show that we can rapidly restore cognitive performance in AD-transgenic mice by oral administration of an oil-based formulation of Bryostatin-1."

A third 50 Most selectee, Mike Molaire of Molecular Glasses posted "

The filing converts prior provisional applications into full U.S. and PCT patent filings, but also incorporates additional proprietary aspects of the Company’s material and process that were recently developed. The new patent filings cover the preparation of novel noncrystallizable hole-transporting, electron-transporting, ambipolar, and luminescent composition of matter, including procedures to ensure their purity. Organic light emitting diode (OLED) is poised to challenge light emitting diode (LED), and liquid crystal (LCD) in flat panel displays, flexible displays and lighting applications. OLED display has an advantage over LCD with its high response speed, wide viewing angle and high contrast in dark settings.