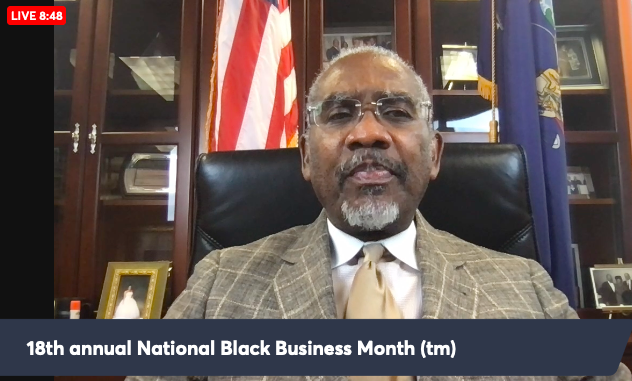 Meeks said a decision to send 80 million vaccine doses to the continent by next month is a sign of a reset in economic ties by the Biden-Harris administration.   “By 2040, one in four people will be African and currently it is one in six.,” said Meeks. “Underestimating Africa’s power and the role it plays in the world is a big mistake.”

The Queens Democrat saluted Dr. John Nkengasong and Africa CDC for heroic steps to organize the continental response to COVID-19.  “The implications for global economic growth and global healthcare are clear,” added Meeks.

Deputy Prime Minister and Health Minister E. Jay Saunders of Turks and Caicos and Diane M. Edwards, President of Jamaica Promotions Co. lead the second day of a focus on Diaspora trade Aug. 4 as they also address the impact of the pandemic on both health and tourism.

John William Templeton, Founder of the 18th annual National Black Business Month ™, addresses the Oakland African-American Chamber of Commerce, honoring him for 50 years as a Black journalist, later tonight to speak out against sports redlining as he urges the Oakland City Council to stand strong for African-American ownership of major league sports.  In a letter to Major League Baseball Commissioner Rob Manfred, Templeton urged MLB to honor the legacy of Jackie Robinson, and Frank Robinson by working with the city to foster African-American ownership of the Oakland A’s.  Later in the month, a 31 Ways 31 Days session will include representatives of the National Hockey League, National Basketball Association, and NFL to discuss how the business of sports impacts Black communities.