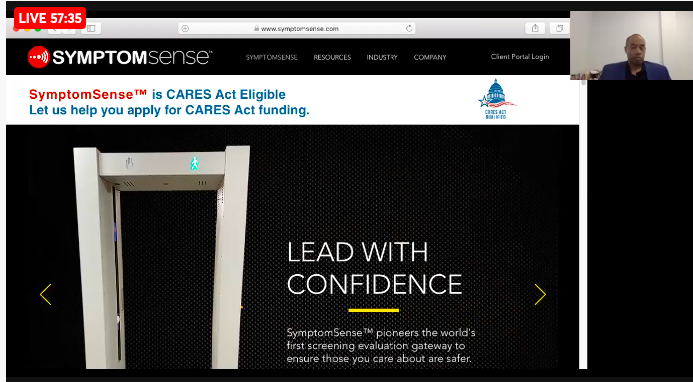 Mathematical Modelling Inc. Chair and CEO Dr. Frederick Foreman spotlighted the need for government agencies and businesses to deploy his DynaKrypt(tm) solution to protect vulnerable computer systems from ransomware during An Equitable Cyberspace, a 31 Ways 31 Days event by the 18th annual National Black Business Month and the Journal of Black Innovation.

The holder of multiple degrees from MIT and former head of engineering at Florida A&M University was termed the “George Washington Carver of cyberspace” in the May issue of the Journal of Black Innovation, with more than 40 inventions to his credit and numerous government grants and assignments.

Thomas View, Esq., CEO of Temvi-Information, also pointed out that Black-owned businesses are vulnerable because they often have not invested in the defenses to cyberattack.   Noting how Russian operatives used Facebook to interfere in the 2016 election, View also said most local governments, including election systems, are similarly vulnerable.  Temvi-Information is a specialized law firm that prepares firms to  prevent and mitigate cyberattacks.

The program also included an exchange between Derek Peterson, CEO of Soter Technologies of Long Island, winner of the Roy L. Clay Sr. Technology Pinnacle Award, and the Silicon Valley Engineering Hall of Fame member, who began programming computers in 1956 as a direct result of the Brown v. Board of Education decision.   Clay was the first Black student to attend a predominately white campus in the South at St. Louis University in 1947 and later became the first director of computer research and engineering for Hewlett Packard in 1965.   By 1971, he helped greenlight Intel for venture capital funding.

Peterson’s company is making another mission-critical product, a multi-symptom walkthough scanner called SymptomSense, which was deployed within three months of the pandemic outbreak in such venues as major league sporting events and government buildings.   The product should be essential for schools around the nation as they reopen for the 2021-22 school year.

Journal Publisher John William Templeton began the program by noting the 561,000 African-Americans work in technology occupations, but the number should be closer to 1.2 million of the 9 million technology employees.   Utilizing African-American technology firms as prime contractors will generate jobs commensurate with the 24 percent of federal civilian and military technologists who are African-American.

Templeton, founder of National Black Business Month, said cybersecurity joins healthcare as one of the two primary ways that the Biden-Harris administration can leverage federal emergency spending to increase the number of large-scale Black-owned firms which would serve as community anchors because both industries fill  needs that are prevalent in every community and are labor-intensive.