The Journal of Black Innovation has selected Barbara Brown, Deputy Director of Exploration Research and Technology Programs of John F. Kennedy Space Center, among the 21st annual 50 Most Important African-Americans in Technology.

She leads processing, assembly, integration, and testing of payloads and flight science experiments bound for the International Space Station. She serves as Kennedy’s lead for the formulation of concepts to support uncrewed operations on the Moon and Mars and directs research, development, testing, and demonstration of flight systems and technologies to advance exploration and space systems. The programs and projects under her purview span across NASA’s Human Exploration and Operations, Space Technology, and Science mission directorates, as well as the Mission Support Directorate.

Brown began her career with NASA at Kennedy as a programmer and design engineer, supporting the development of the shuttle configuration management system and a voice commanding system prototype for space station operations. She has spent most of her career leading the development and application of software, intelligent systems health management tools and techniques, command and control architectures, robotics, and other devices to increase human-computer systems performance and enable automation and autonomy of ground or space-based operations for the shuttle, the space station, and other exploration systems and infrastructure.

Brown has coauthored numerous papers and reports on physics-based diagnostics, autonomous cryogenic system operations, and intelligent vehicle/systems health management and has received numerous awards and recognitions, including the NASA Exceptional Service Medal and the Outstanding Leadership Medal. She has a Bachelor of Science in computer science from Florida State University, a Master of Science in industrial engineering from the University of Central Florida, and is a Harvard School of Government Senior Executive Fellow. 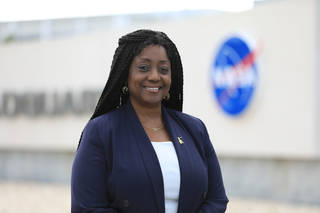