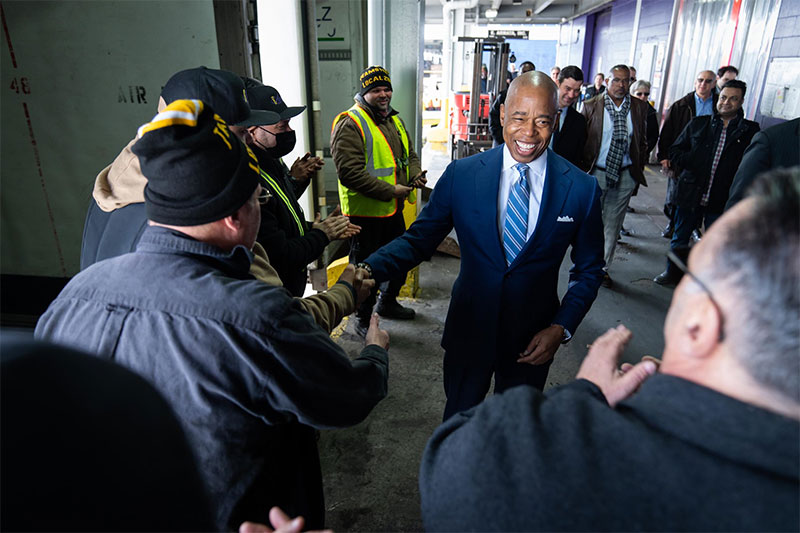 NEW YORK – New York City Mayor Eric Adams, Washington, DC Mayor Muriel Bowser, New York City Police Department (NYPD) Commissioner Keechant Sewell, and Metropolitan Police Department of DC (MPD) Chief Robert Contee III today announced the arrest of the suspect in multiple shootings and murders of individuals experiencing homelessness across New York City and Washington, DC. Between March 3 and March 9, three men were shot in Washington, DC, and one of those men succumbed to his injuries. This past weekend, two men were shot in New York City, and one of those men succumbed to his injuries. The NYPD, the MPD, and the Bureau of Alcohol, Tobacco, Firearms and Explosives (ATF) began coordinating immediately on Sunday morning. Mayor Adams and Mayor Bowser spoke on Sunday as well, and both mayors, Commissioner Sewell, Chief Contee, ATF, and others met yesterday to discuss the manhunt to locate the suspect.

“Yesterday, I stood with Commissioner Sewell, Mayor Bowser, Chief Contee, and the ATF to show the coordinated effort between multiple cities and the federal government to bring a cold-blooded killer to justice, and, today, we’re proud to announce that that suspect is in custody,” said Mayor Adams. “This man targeted those experiencing homelessness with no regard for life, but this criminal is now off the streets. Gun violence against anyone, let alone our most vulnerable populations, is sick, but thanks to the coordination between different levels of law enforcement and the public’s help, those experiencing homelessness can breathe a sigh of relief today. The recent rise in gun violence remains a concern for us all, and we will do everything in our power to keep our citizens safe because public safety is the prerequisite to prosperity.”

“We want to thank everyone in Washington, DC, New York City, and elsewhere who sent in tips about this suspect. I also want to thank Mayor Adams and his team in New York, our team at MPD, as well as our federal partners at the ATF for their collaboration and partnership. We said that the work to remove this man from our streets was urgent and our communities responded,” said Mayor Bowser. “We know that this experience has been especially scary for our residents experiencing homelessness. Our work continues to end homelessness and ensure all residents have access to safe and affordable housing. Our work also continues to get guns off our streets, to address the proliferation of firearms, and to prevent violence while also working swiftly to hold people accountable when they terrorize and bring harm to our communities.”

“Excellent detective work, teamwork with our partners from the Metropolitan Police in DC at the ATF, and the FBI culminated in the arrest of the suspect in five shootings, including two murders of homeless men in New York City and Washington, DC,” said Commissioner Sewell. “People experiencing homelessness have many worries to cope with every day. Tonight, they will have one less.”

“I want to personally thank our community members who submitted tips and information in this case and thank our law enforcement partners for their tireless efforts in bringing this individual to justice,” said Chief Contee. “It is essential for us to work together as a community to close cases and show the world that there is no place for those who commit violence in our communities.”