BMWORLDWIDE–SAN FRANCISCO– The Queen of Pan Africanism, Maya Angelou, was honored during the unveiling of the first quarter bearing a woman in the neighborhood where she thrived as a teenager and adult .  Rep. Barbara Lee, D-CA, championed the coinage along with Angelou’s recently passed son, Guy Johnson, and former U.S. Treasurer Rosie Rios.  Speaker Nancy Pelosi, D-CA, who represents the area, joined Lee, Rios and the widow of Johnson, Stephanie Floyd Johnson at the Western Addition Branch Library at Geary and Scott Streets.

It would take seven autobiographies to capture one of the most extraordinary lives in human history, five of them written before age 45.  Western Addition Branch Library manager Naima Dean, also a native of the neighborhood, joined the California African-American Freedom Trail in February to map all the locations mentioned by Angelou in her seven self-portraits.

Trail curator John William Templeton introduced the draft legislation for a Maya Angelou National Historic District Study Act during the Architecture in the City forum of the AIA-San Francisco in September 2020, following up with an op-ed in the San Francisco Chronicle in January 2021.

Angelou told her own story despite being forced out of George Washington High School because she became pregnant with Guy Johnson in the 1940s.

Instead, she attended the S.F. Labor School, co-founded by Langston Hughes, and chose to desegregate the city’s trolley lines as a conductor at age 16.

Her mother, Vivian Malone, a night club operator, would ride behind the trolleys with a shotgun to protect the daughter.

The passage to age 16 was the topic of her first autobiography I Know Why the Caged Bird Sings, which is dedicated to her son, in 1969.

Although that book is a staple in classrooms, she wrote six more autobiographies.

Gather Together in My Name followed in 1974, only covering a two year period as a young mother in the Western Addition of San Francisco.

Next was Singing and Swinging and Getting Merry Like Christmas in 1976, followed by The Heart of a Woman in 1981 and All God’s Children Need Traveling Shoes in 1986.

Angelou lived in a 14-room house owned by her mother and stepfather at the corner of Post and Laguna Streets during those teen years.  She also worked at Melrose Records in the 1200 block of Fillmore, where her love for music was honed and where she met her first husband, whose name led to her rebranding from Marguerite Johnson to Maya Angelou.  By then, she was a dancer and Calypso singer in the nighclubs of North Beach.

Over the next decade, she would teach at a university in Ghana, organize for the Southern Christian Leadership Conference and become a confidante of Malcolm X, the only person to work closely with Kwame Nkrumah, Dr. Martin Luther King Jr.and the Black Muslim minister.

In 1968, she would tie all those threads together in an extraordinary ten hour documentary series for the local public television station, Blacks Blues Black which is a portrait of Black San Francico at its height, when African-Americans were the second most numerous ethnic group in the city with more than 100,000 population.  This was the same year that fellow George Washington High alumnus Danny Glover would be part of the longest student strike in history at San Francisco State University in order to gain a College of Ethnic Studies.

Those vignettes add to the rich inventory of historic sites which have never been recognized by the City and County of San Francisco.  During Angelou’s prominence in the city, one of the worst mass casualty events in American history, the November 18 massacre in Guyana of mostly Black San Franciscans, occurred.   It has never been landmarked or officially acknowledged.  Similarly, Angelou’s presence in the City has been rendered invisible. 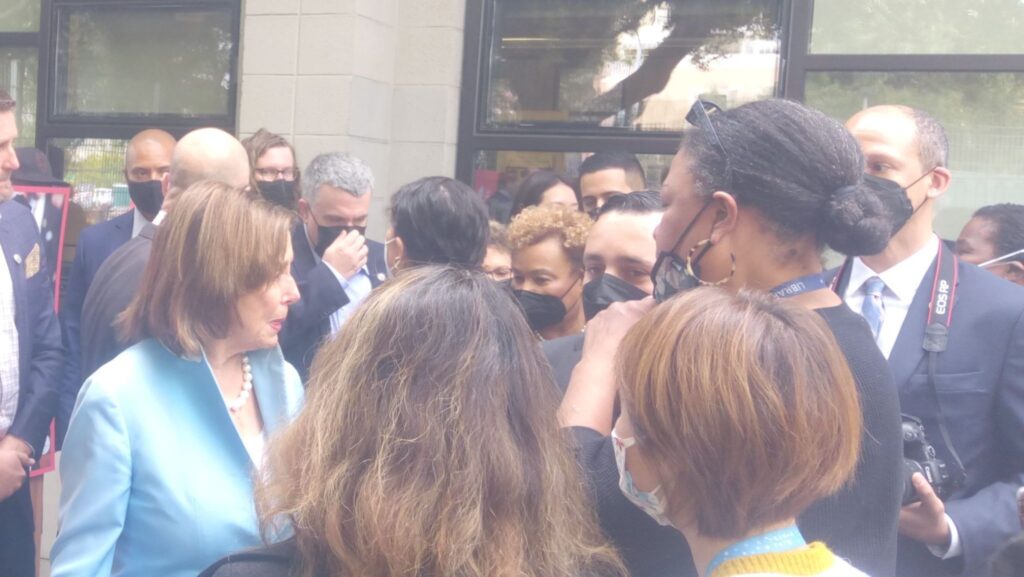