The Battle of Puebla on May 5, 1862 saved American democracy and was a catalyst for the end of slavery. Cinco de Mayo is as big a day for African-Americans as it is for Mexican Americans.
One of the blind spots in the history of the American Civil War is the importance of the Mexican Civil War from 1857-1859.  When England, Spain and France invaded Mesico, it caused Southern slave holders to envision spreading South and shipping cotton directly to Europe.
Had the French won on May 5, as expected, the prospect of an alliance with the Confederates might have tipped the balance of the American Civil War and prevented the Emancipation Proclamation.
Ironically, Juneteenth actually had more to do with freeing Mexico from French rule and a return to slavery, as the U.S. Colored Troops sent to the Texas border helped convince France to abandon the invasion.
African-Americans began celebrating the end of slavery annually in San Francisco in 1852, founding two churches on West Indian Emancipation Day August 1, 1852 — Third Baptist Church and First A.M.E. Zion.   Members of those two congregations, along with Bethel A.M.E., founded in February 1852, professed that their purpose was “the elimination of American Chattel Slavery.”
By 1866, they began observing Emancipation Day on Jan. 1.
This year’s 72st anniversary of San Francisco Juneteenth was the first such celebration outside of Texas, and was responsible for promoting a Great Migration of African-Americans from Texas to San Francisco during the 1950s which led to more than 100,000 Blacks in San Francisco by 1960.  Three years later, one of those migrants, Willie L. Brown Jr., was elected to the California Assembly, beginning a 40-year career in elective politics.  One of his interns is now Mayor of San Francisco.
June 19, 1865 marked the end of the Confederacy, with the fall of the capital of Texas, Galveston.  Four regiments of U.S. Troops of African Descent took on the lonely duty of keeping French forces in Mexico from joining forces with Confederates beginning in 1863.   They received a telegram in April one week after the surrender of Confederate forces in Virginia and North Carolina.  However, two Confederate generals in Texas went to Mexico City in May 1865 to offer Texas back to Mexico.   Gen. U.S. Grant ordered the 25th Corps, the first troops to enter Richmond, to sail for Texas to prevent this alliance.  By June 1865, 14 units of U.S. Troops of African Descent were in Texas as U.S. Colored Troops comprised 60 percent of the U.S. Army at war’s end because their three-year enlistments had begun in 1863 and 1864.   The General Order No. 3 began a year-long process of physically going to plantations across the Texas to liberate 180,000 held in slavery. The fall of Texas removed the possibility of a Confederate revival and led to the last four states ratifying the 13th Amendment, which ended slavery.  Their presence also led to the French withdrawl from Mexico, restoring that country’s independence.
The significance of Juneteenth is the centrality of 209,145 U.S. Troops of African Descent and 700,000 civilians who played the decisive role in preservation of the United States.  Their bravery, courage and effectiveness was key to the passage of the only three Constitutional Amendments of the 19th century, particularly the 15th Amendment, which was specifically credited with honoring the service of Black soldiers during the Civil War with the right to vote.  In 1866, Black voters would be the majority of voters for the Constitutional convention in Texas. They would bring that political sophistication to the relative freedom of San Francisco to transform the City.
Historian John William Templeton has been the official historian for San Francisco Juneteenth for more than a decade.  He is author of African-Americans in the West in the Oxford Encyclopedia of African-American History, Vol. 1 and Our Roots Run Deep: the Black Experience in California, Vols. 1-4, celebrating its 30th anniversary this month.  He presents ORDER OF BATTLE: U.S. Troops of African Descent in Texas 1863-1914 at 6 p.m. June 18 with maps and charts of the impact of African-Americans in the Union victory in the Civil War and conducts a sea cruise of the California African-American Freedom Trail Sunday, June 20 at 12:30 p.m. from Pier 43 1/2 that describes the impact of San Francisco abolitionists as catalysts for the Civil War.
Road to Ratification
Citizenship for All 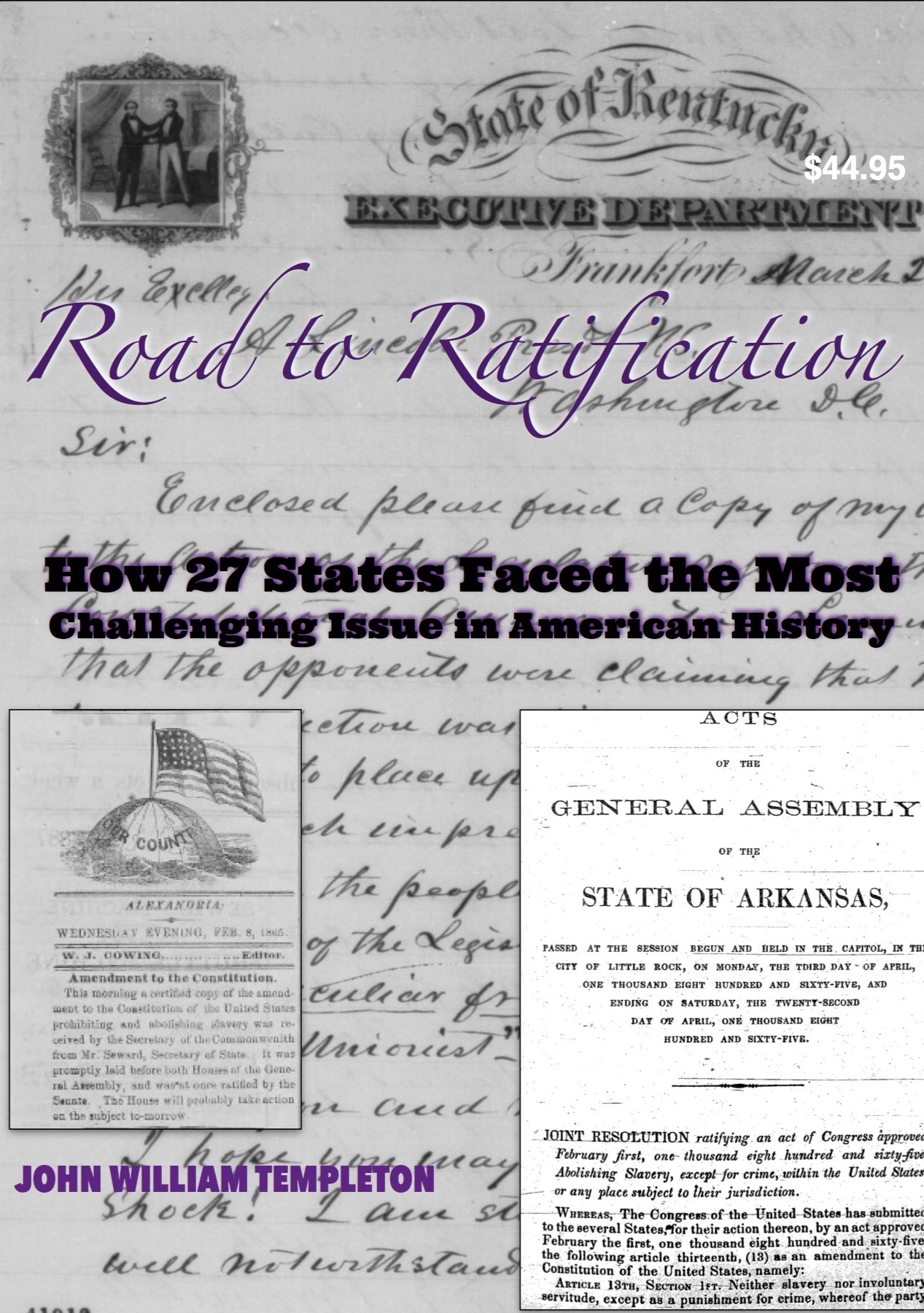 The Black Regiments who Freed Mexico and America

Finally the regiment was ordered to Brazos Santiago, Texas, May 4, 1865.[12] The regiment pulled duty at Clarksville and Brownsville on the Rio Grande, Texas, until January, 1866.[9][13] The regiment assisted in attempting to prevent Confederate forces from avoiding surrender by entering Mexico.[14] The unit was reported as being at Brazos, Texas, with 490 men on June 10, 1865,[15] and mustered out on January 30, 1866.[16]

One of the soldiers’ most important achievements came at the end of the war. Between duties, and after the termination of hostilities, soldiers of the 62nd and 65th U.S. Colored Troops had been learning to read and write. The troops of these three regiments agreed that they wished to continue their studies as civilians. The soldiers and their officers signed resolutions pledging to work to establish a school “for the special benefit of free blacks”. Troops of the 62nd U.S.C.T. were especially energetic in working towards this goal, raising $4,000 to support the establishment of the planned educational institution.[1] This effort eventually lead to the opening of the Lincoln Institute (now Lincoln University) in Jefferson City, Missouri, on September 16, 1866.[2] 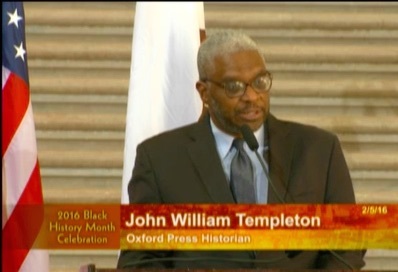 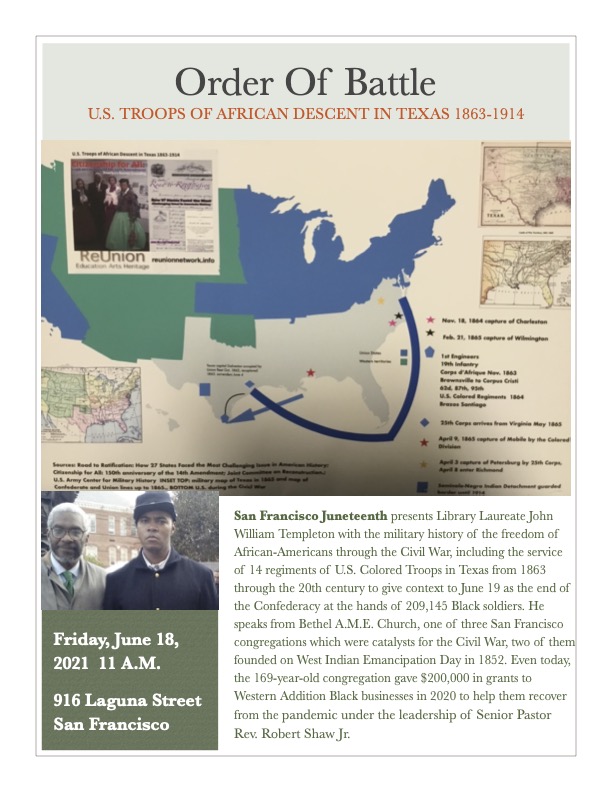 Restoring the history that created modern America and Mexico has been the mission of John William Templeton, author of Freedom is More Precious than Gold: African-Americans in the West in the Oxford Encyclopedia of African-American HIstory, the Age of Frederick Douglas.

Two years after that comprehensive history of 23 states, he was commissioned by the California Department of General Services to interpret the California adoption of the 13th Amendment. He created the exhibit Gold Rush Abolitionists to appear in the Historic State Capitol Museum.

By 2013, he found all of the resolutions of adoption for every state that ratified the 13th Amendment, using them as the springboard for Road to Ratification: How 27 States Faced the Most Challenging Issue in American History.   For each state, he discovered the first African-American to appear in the jurisdiction and brought the history forward to 1865.

The comprehensive approach incorporates the multi-lingual history of a country which was only one-tenth occupied by Great Britain, but whose history is almost exclusively told through an English lens.

He presented Order of Battle: U.S. Troops of African Descent in Texas 1863-1914 as the keynote speaker for San Francisco Juneteenth in 2021.