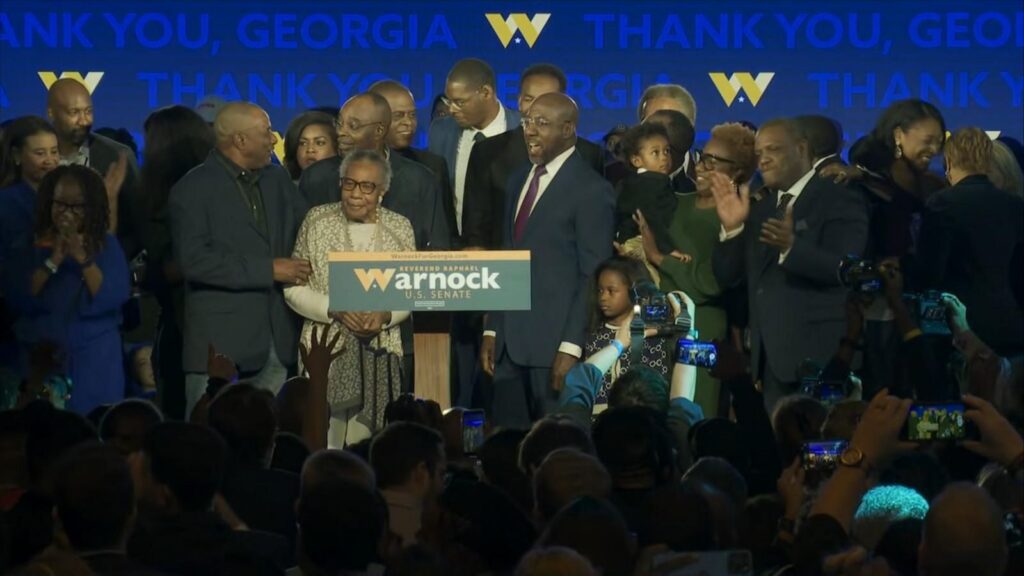 ATLANTA– On the date of the most important event in African-American history, the successor to Dr. Martin Luther King Jr. as pastor of Ebenezer Baptist Church won election to a six year term as senator from Georgia.

Sen. Rev. Dr. Raphael Warnock discovered how the link between legislating and freedom is tied to the Peach State as he saw two-third of white voters vote for his Republican opponent.

At stake is control of the most powerful financial engine in the world, the United States government. Warnock is again part of the club of 100 who hold the power to confirm who makes those decisions in executive agencies and the courts.

Rep. Nikema Williams, D-GA, chair of the Georgia Democratic Party, said Black voters in her Atlanta district and across the state realized the consequences of the race.  “I told you the Fighting Fifth was going to show out,” she told MSNBC interviewers before Warnock’s victory speech.

The Baptist minister was true to form by giving God the glory and telling followers tomorrow, “We have to go in the valley and go back to work.”

His election in 2020 brought about the first direct monetary intervention for African-Americans in American history through dramatically increased funding for Black-owned banks; Black farmers and historically Black colleges and universities.

blackmoney.com Editor John William Templeton will meet with business and civic leaders from seven states at Clark Atlanta University Saturday to chart a mechanism to insure that those funds reach Black communities and businesses to fundamentally address the endemic poverty of the Black Belt in health, environment, agriculture, transportation and national defense.

On Dec. 6, 1865, the Georgia legislature was the 27th to ratify the 13th Amendment, sparking headlines terming it the Second American Revolution.

Warnock will be the functional spokesperson for more than 20 million southern African-Americans whose access to federal funding has been blocked by a lack of political power.  He’s already passed two bills to direct $5 billion to Black farmers.